A few decades ago a baby was born looking radiant like a redolent spice Her Eyes wide-open like she came ready for it all Cried out  loud when she needed to be touched Mother’s eyes sparkled with love and some tears of joy Father’s heart filled with pride and a gratitude to God Everyone definitely knew a queen had just arrived Every hand seriously craved for a feel of her Her birth story is surely a tale like none other It’s worth being sang in an opera It’s a picture that must be painted for all to see This is indeed the story ‘the queen of my heart’   Written by: Hamidat Doyinsola & Kazeem Adio (C) 2022
Post a Comment
Read more 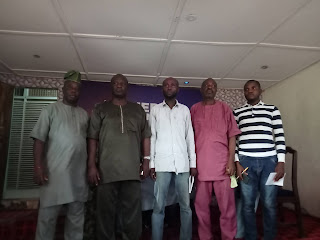 Association of Nigerian Authors, Osun State Chapter has sworn-in new leaders who will be leading the association. The inauguration of new executives was done with the aim of promoting reading and writing culture in the state. They came in to continue the promotion of writing culture in the state.   The inauguration of new executives happened at Osun NUJ Press Centre in Osogbo, the Capital of Osun State.    In a press release by the current Public Relation Officer of the association, Mr Muideen Afolabi, noted that “the incoming executives who are eager to perform, promise to swing into action as soon as the inauguration is done.”   The New Chairman is Mr Segun Ajiboye. He promises to use everything within his jurisdiction to drive ANA Osun State Chapter (ANAOS) to the peak of its success, both digitally and off digital.   The outgoing chairman, Mr Muriola Awoseemo pledged that he would support the current administration. He then assured that he would do his best to m
Post a Comment
Read more

TRAMMELLED ON THE JESUS OF LÜBECK - Ibrahim Adeniji

February 29, 2020
Hope was tweaked on the shores of West Africa Home of the gods and the sires of earth Hearth of men with shades of night Honed to plough lands and chase the wild Live free and fruit the child A place where nothing surpassed our ascendants But a different sun berthed on us And it brought the darkest cover our land has ever seen Snatched like the field of poachers One by one men were plucked like fruit from a vineyard Selectively graded by agility and vendure Loaded on an English carrack to live out in servility A vessel as dreadful as a war tank Branded and shackled to be kept in the belly of this beast Guarded to ensure escape is a fruitless feat And then we listened as the great tide washed us away Many trembled as the ship pierced through the storms The great foggy passage to merchants and lost swarms Suns and moons passed in this horrific trunk First our beliefs, then all our dreams sunk The white coloured people fed us crumbles and a mountain of despair Made us suffer like to nothi
Post a Comment
Read more

February 29, 2020
Colours are the realest expressions They are certain, definite intentions The only way earth expresses its emotions Change of season and other devotions Blue, for its beautiful signs and purity Red for its temper that dissolves the skyline Black is its horror, a shade of terror White is its cuddles that touch your heart in its smearing Colours are the truest of feelings Full of communications, yet devoid of words They speak passion, rage, love, elation with fluency All colours are noble born with no disparity For they guide our way out of the wilderness Colours are instruments of the divine
Post a Comment
Read more

February 29, 2020
My world is beautiful, it bears me all over Every day is a fantasy, precise to my destiny And then one day it was all on fire My Clark met a kryptonite Piece by piece my paradise began to crumble I became a stranger to my routine My lovely worst fear knocked on my door Irresistible like gravity, I let her in But she came seeking not me but one of my own My eyes immediately grew wet and puffy Shoulders sagged and heavy I must now find my way back Patch and amend my breached strong hold Pray I return to my Eden It’s the only place for me like nowhere else The place I can love, thrive and cherish myself The place immune to Claire and my Kryptonite And one day when the crow wake us again I hope like me you get what you want
Post a Comment
Read more 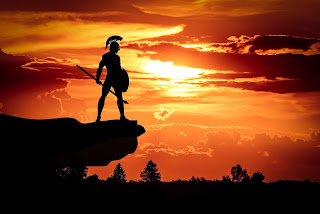 My blood pumps harder than it should Energy revels in my entire space Ever ready for impact like a bullet in a barrel My heart sing songs of praise Every moment I live to embrace I think I’m going to be a hero I will rise like the falcon’s wings Thrust through injustice like an inspired agonist Build refugees a home & put others’ needs before my own Become a bridge and not a fence Cast goodwill when shown offence Give everyone a hand with just two Raise the fallen and those afraid to I don’t need money or power Or anything everybody doesn’t have I only need see with my head and my heart The world is part of me, as I of it If I can transform even just one sadness around My sadness too will go beyond being found If you want your life to really matter Then live it for yourself as well as others. Photo Credit: Pixabay.com
Post a Comment
Read more

October 01, 2019
Stranded we are in the middle of the way, The missions get tainted with pecking mirage of gaffes,  The wrinkles of the road smile  With thorns of recklessness  Of the driver Masquerading with regalia  Of tainted innocence.  The heart of the land,  cracked!  The eyes of the earth  Blind!  The body lost its head  In the market of tusles The land is a tree  With wooden stairs Of decayed root Growing boughs  With absence of  green leaves The land wears her gorgeous garment Celebrating rifts of ages,  Between the old  time and the fragile generation.  ©  Olaniyi Abdulwaheed 2019
2 comments
Read more

Birth of a great star

July 11, 2019
For Alhaji Kazeem Adio On a splendid day a star Rose in the sky, Brightening the day With his mercy And generosity. Like the shore, He absorbs Every being. This stars glows Every day May Allah make this star Continue to brighten The land, Lead us Successfully. © Abdulwaheed Olaniyi 2019
Post a Comment
Read more

FOR MY LOVE - By Abdulwaheed Olaniyi

June 29, 2019
I have dived in the mystic ages of your heart, Dreamed  in the silent heart of the night, Envisaged our union Through the binocular rainbow of your eyes. Ayo, I looked through the eyes of the sky, gazing at your rainbow from afar, I lingered to touch the sky, but the cloud held my eyes to hug your heart. If cloud seals my eyes to see your face, My heart echoes the sonorous song of my lines to you And my mind's eyes can view your beauty. Let my love continue to breathe in the gentle shore of your heart. © Abdulwaheed Olaniyi 2019
Post a Comment
Read more
More posts